M@rsouin conducted a survey on digital practices in France and the realities of empowerment through Internet.

This survey was conducted as part of a bigger research project funded by the French National Research Agency (ANR : Agence Nationale de la Recherche), called „Capacity”. The Capacity Project aims at examinating the realities of empowerment in the digiral era. One of the question was : who benefits the most from the potentialities of empowerment brought by Internet use ?

The framework of this survey was also the first opportunity for M@rsouin to take part in the World Internet Project. The questionnaire includes thereby the set of common questions settled during WIP meeting 2016 in Taipei, which make possible international comparisons.

Besides WIP common questions, the questionnaire included numerous questions on digital skills, digital opportunities and empowerment, and questions intended for Internet non-users. In average, the length of the face-to-face questionnaire was 35 minutes.

The sample size of the French dataset is 2036 people. The data is representative of population living in metropolitan France (no overseas territories), aged 18 years and older.

The data was collected in such a way as to ensure that the sample is representative in terms of :

Here are a few slides presented during WIP annual meeting in Moscow, the 6th of July, which offer a glimpse into the main results of the French national survey. 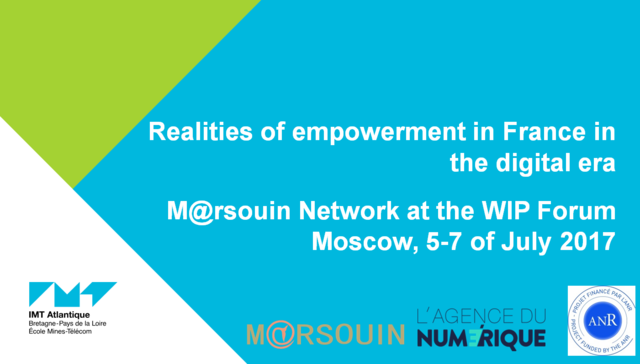 The full French questionnaire and the full dataset of the survey have not been translated into English, but they are available in French in opendata : https://marsouin.shinyapps.io/ShinyMarsouin/ https://www.marsouin.org/mot281.html

In case you need help to access the files (full questionnaire and full database in French) feel free to contact us : contact@marsouin.org

The survey was funded by :