This paper is related to two empirical research projects: one was an investigation of users of a University Service of Distance Learning; the second was an ethnographic research which was aimed at identifying the pedagogical models underpinning new professional degree courses (2004-2006). Our methodology is essentially qualitative relying both on the direct observation of practice and on the analysis of the discourse of ICTE users to identify progressively the differing pedagogical models implicit in such practice. Our particular theoretical approach is to place Information and Communication Technologies in the wider context of knowledge relationships. In Education and Training, the relationship which users of ICTE have with such technologies can be studied in part as a relationship to specific knowledge which, when put into other contexts, opens up other, much wider, theoretical questions. And this led us to a range of questions at three differing levels: a generalized view of ICTE; the cultural experience of ICTE; and the systematization of ICTE. To each level, we have attributed three core concepts: ‘gathering’ butinage, ‘poaching’-braconnage, and ‘odd jobbing’ -bricolage. In the generalized view of ICTE, ‘gathering’ relates to notions of navigation. Within the cultural experience of ICTE, ‘poaching’ relates to notions of programming, and in the systematizing of ICTE, ‘odd-jobbing’ relates to notions of systems development. It seems that this last dialectic is, as far as ICTE is concerned, the most productive.

This paper is part of the synthesis of work carried out over ten years on the development of ICTE (the uses of ICT in education and training) in the field of higher education and professional training in Brittany. Out of nine research projects [1], I have chosen to organize this paper around three empirical studies:

I then compared this data with results from four other studies [4] on the role of ICTE in higher education in Europe.

With several colleagues from the CREAD in Rennes we have approached ICTE from the more general perspective relationships to knowledge. In education and training, relations between users and ICT can, to a certain extent, be studied as relations to specific knowledge which, in another context, are related to broader theoretical questions.

To mention only a few studies in this field, I started several years ago by examining the relationship between children and teenagers in specialized educational programs, young drug addicts and young adults on welfare and computing [5]. Jean-Luc Rinaudo [6] has studied this relation among primary school teachers and Isabelle Collet [7] has studied more recently, and with equal relevance, the relationship between students and students of IT with computing. Finally, Magali Moisy [8] has undertaken highly promising research on adolescent video game players. This approach has led us to examine the notions of culture, technical culture, computer literacy, cyberculture, video game culture… within a definition linking subject and society that I have borrowed from Winnicott: “It is cultural experiences that give the human species this continuity that transcends individual experience” [9]. The basis for this community of researchers and the coherence of these studies is the reference to a clinical approach inspired by psychoanalysis. To cite Claudine Blanchard-Laville: “this approach has the dual characteristic of giving priority, in the situations studied, to unconscious processes, in the Freudian sense, and not eluding the question of the transferenetial relation of the researcher and the object/subject studied but, on the contrary, working on the basis of this relation and trying to create a dynamic along the way” [10].

Personal experience with ICT can be a scientific asset providing one can break free from one’s personal technological demons. We converge in this attempt at a “qualitative, clinical, ethnographic and anthropological vision” of ICT with at least two other fields of research: on the one hand, Information and Communication Sciences (Boullier D., Breton P., Perriault J., Miège B., Moeglin P, Musso P. …) and on the other hand, Psychoanalysis [11] (Missonnier S., Stora M., Sibony D., Tisseron S.…) For us, in this study of the use of ICT in higher education, this means trying to conduct research RELEVANT to users and uses of ICT, its interpretation being only truly satisfactory if it is enriched by the PRACTICE of ICTE as a multidimensional cultural experience. One must remain humble faced with the complexity of the task, my strategy for surmounting the inconceivable being to capture this “experience”, the testimony and emotions of different players involved in training, both externalized and internalized, since I am, to a certain extent [12], involved in ICTE myself. This position of “peripheral observer-participant” is similar to what Georges Lapassade [13] refers to as an ethno-clinical role, associated with theoretical references borrowed from psychoanalysis, social psychology and anthropology. Georges Lapassade specifies that “researchers who choose this role- or this identity- consider that a certain degree of involvement is necessary, indispensable, for anyone who wants to capture, from the inside, the activities of people and their worldview. They do not take on an active role in the situation studied and thus remain on the ‘outside’” [14]. Contrary to my research on the uses of ICT in specialized training or social insertion, where my involvement was total and my approach profoundly clinical, for my research in the field of higher education, it seemed preferable to choose an ethno-clinical role in a transdisciplinary perspective.

I will refer to Philippe MEIRIEU [15] in order to further specify the protocol I propose [16]: "Because the pedagogue is someone ‘in the field’, because he is in charge of educating those entrusted to him, because he is confronted with the necessity of making decisions, pedagogy is, obviously, ‘a discipline of action’. This is why, for the same reasons as medicine or even politics, it does not have, strictly speaking, an epistemological coherency of its own. Contrary to physics, linguistics, economics or history, it does not derive its identity from a homogeneous system of validation but more from its ‘object’ –education–and its project–producing models that enable access to knowledge of ‘things educational’ and to act in a coherent and efficient manner. In other words, it is not an area for the administration of proof, but rather for what could be referred to as the ‘management of sensible decisions’."

Starting with the principle put forward by MEIRIEU that progress in the field of pedagogy does not reside in the administration of complete and definitive proof, which does not exist, but in the comprehension of the more or less explicit model that drives each training action, for ICTE, I will attempt to reveal and understand the implicit pedagogical models underlying university programs. In order to reinforce my idea, I will start with a diagram showing the polarities- the three paradigms- of a system for revealing implicit pedagogical models: 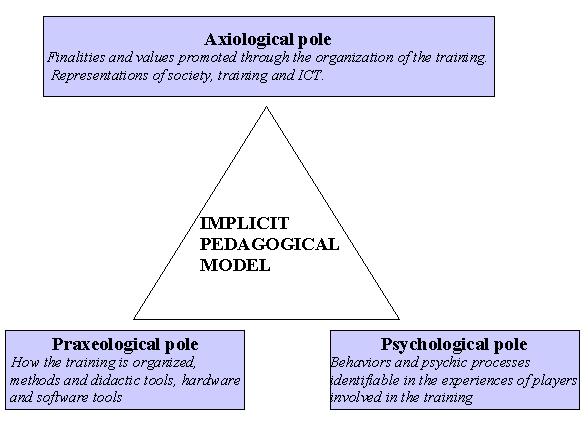 This pedagogical triangle will enable us to specify the topological position of the scientific model used for this type of research. To identify practices and uses of ICTE, the ideal solution would be to reveal the multitude of implicit pedagogical models used by the players when in action. This is structurally impossible. As CASTORIADIS has demonstrated [17], these models are as numerous as the players involved. Moreover, they depend on countless parameters that are also, for the most part, unconscious [18]. Nevertheless, these implicit models contribute to the imaginary construction of training. They construct its collective social imaginary-the driving force of the pedagogical team- and its social history-its project [19] as a living, flesh and blood system. This means that these models, as imaginary and ephemeral as they may be, influence training. The implicit pedagogical model of an ICTE system is necessarily a partial theoretical construction that is systematically multi-referential [20] and virtual [21].

This approach provides, among others, a strategy for identifying implicit models that influence training processes. It enables us to move from the latent to the manifest character of a training program considered as a series of events– intentions, developments, projects… which are at first latent [22] and then more and more manifest – evolving into the training program that we are going to experience. For this perspective, we can also say that this body of research adopts an ethno-clinical approach.

For the SUED, a questionnaire was distributed in 2004 to all the service’s users and combined with 14 interviews of students, considered the most representative of this population, as well as long interviews filmed by students enrolled in the USETIC degree program (Socio-educational uses of ICT).

For the DESIGN and SDIF degrees, the methodology used was strictly qualitative. It combined observations during training as well as structured interviews with students, teachers, professionals and the two program directors.

When conducting research in the SSH, particularly when referring to ethnography, clinical research or symbolic interactionism, the instrumentalisation of data collection is an important aspect, but legibility of the methods of analysis applied to the data is even more important.

For this research, I used a hypertext decryption protocol that consisted in:

classifying the data in the three categories of the modelization triangle (axiological– praxeological – psychological),

identifying the pole of the triangle where the model emerges,

finding the dominant signifiers for each pole that could be used to isolate the central notions and concepts of the implicit pedagogical model for each degree program.

Having served as Vice-president of training, in charge of professional insertion, Director of the Education Sciences Department and as a member of the Board of Directors of the University of Rennes 2 and Assistant Director of the UFR Sciences Humaines (Humanities College), I was, and still am, in a privileged position to observe the strategies and institutional interactions, as well as to gather and conserve the texts, that are the basis of ICTE programs at the university [23]. Having taken part in many meetings which generated, and afterwards used, these texts, one could object to the subjectivity of my analysis. Thanks to Bachelard [24], we know that reality reveals itself to us through subjective experience. Apprehending an object in its exteriority is not sufficient to make it objective since illusion is consubstantial with knowledge. As Nicole Mosconi wrote “Foucault – and Nietzsche before him – have indeed shown that, among what is considered knowledge in our societies, a great deal consists in subjective rather than truly objective elements” [25] Furthermore, we have known, at least since Philippe Breton (1990) and Pierre Musso (2003) that cultures formed around ICT (computers, internet, networks…) remain closely linked to contemporary imaginaries. It would be a pipe dream to try and escape from the power of illusions without building a system of rationalization that includes the subjective dimension.

Institutional involvement is also an experienced multi-dimensional cultural practice that can contribute to the elaboration of scientific analyses, which, when reproduced, have a legitimacy earned “in the field”. Rather than denying or suppressing this hidden side of the researcher, my attitude consists in breathing life into my results and my analyses using my experiences as a participant, using a written style where both can easily be identified.